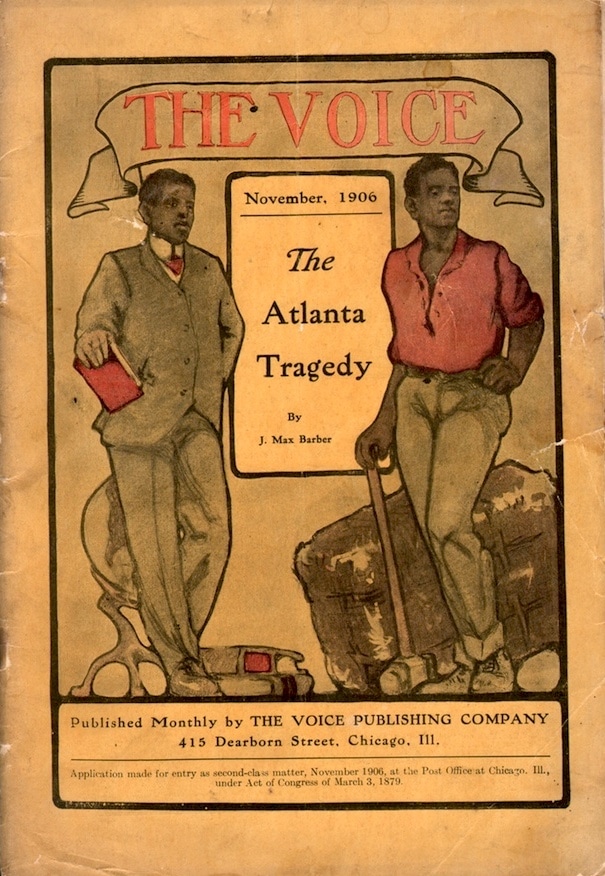 rare, essentially volume one, number one of the ‘new’ voice, as it began publishing out of chicago (see Danky 6203). In February of 1906, 500 ministers, educators and newspapermen gathered in Macon for the Georgia Equal Rights Convention. In the fall, white politicians, including soon-to-be Governor Hoke Smith warn that black voters will soon outnumber whites. More speeches follow, full of race-baiting, ginning up white paranoia. Then, not surprisingly; a white farmer’s wife accuses an unidentified black man of rape, and the violence begins. September 22, an angry mob attacks a black-owned restaurant in the central business district, beating the owner and her daughter, and burning the restaurant to the ground. The mob soon swells to near 10,000. Four days later, the black community is devastated; scores are dead. Blacks that armed themselves to defend their families and homes are overrun. In the aftermath, Max Barber, editor of the Voice was forced to leave the city after accusing several white men of donning ‘black-face’ and assaulting white women in order to incite the mob. In a seven-page article, Barber discusses the riot, its causes and his reasons for leaving Atlanta. Swann Galleries, Sale 2377 Lot 288.